Stars of the Show

Because of BC’s natural advantages (location and climate), growers here have always focussed on pushing the season late in order to have the last cherries in the northern hemisphere. For this reason, you will not find very early ripening varieties from cherry breeding programs in California, for example. The majority of cherries that are grown in British Columbia come from the world-famous breeding program at Summerland right here in the Okanagan valley. Click here to visit the Summerland Varieties Corp. website: summerlandvarieties.com

We also have some fantastic varieties from other breeders around the world, and here at Global Fruit we continue to search for and test new cherries that can deliver something truly special for our customers. Watch this space for new varieties coming soon!

All our cherries are stars – they simply don’t make it into our team if they are not. Here you can find out a little more about them all. 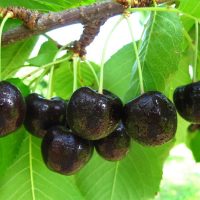 Always one of the first cherries to get the season started in British Columbia, normally mid-late June, Santina is firm with highly attractive deep red skin. 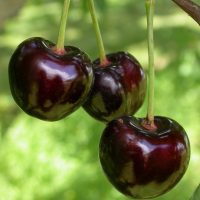 Following Santina in the harvest calendar, Cristalina cherries are a consistently large size with a glossy, polished appearance. 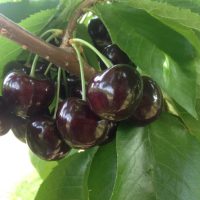 Only released by Summerland Varieties Corp. quite recently, this variety is available in limited quantities but is gaining a reputation as an excellent performer in the early-mid season period. 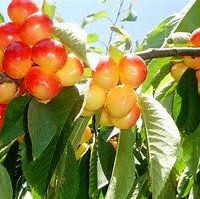 The most famous ‘blush’ cherry in the world, named after the picture-perfect mountain in Washington state where it was bred. Rainier is actually a cross between Van and Bing (both red cherries) and is renowned for the contrasting yellow and red skin and delicious flavor. Don’t ask us how two red cherries produced a bi-color variety – we are just glad they did! 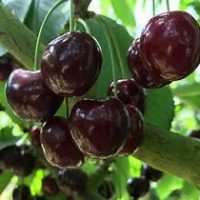 Originating from the Czech Republic in the 1990s, this variety is considered by many to have a perfect cherry flavor. It is firm with very deep red skin and flesh. The stems often carry that reddish pigmentation too, so don’t be concerned if they aren’t as bright green as some other varieties. The proof of Kordia is in the taste. 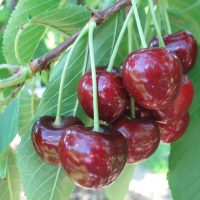 Named in honour of Dr. K Lapins who was a pioneer in breeding self-fertile cherries at Summerland research station more than 50 years ago. He selected this variety (a cross of Van and Stella) way back in 1971, and it is still holding its position as one of the most popular cherry varieties more than 35 years after its commercial release in 1983, which proves that Dr. Lapins really knew a great cherry when he saw one. 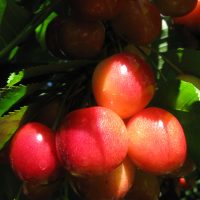 This is Summerland’s own answer to Rainier. A delicious tasting bi-colored cherry, with an average size that is slightly larger and a harvest date approximately one week later than Rainier, Stardust is fast becoming the new standard in ‘blush’ cherries and allowing us to extend the selling period for these little beauties. 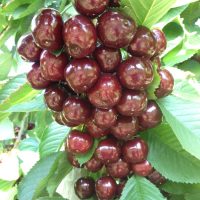 With a similar picking date to Lapins, Skeena had to be a winner to earn its position in the Summerland line-up. It is naturally a little larger and, with a highly appreciated flavor profile, Skeena has become very popular with growers and consumers alike. 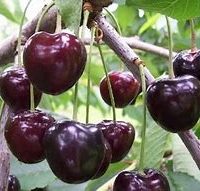 Coming from a breeding program in Germany in the 1980s, this mid-late season variety is another favorite amongst cherry connoisseurs for its dark color, dense texture and complex flavor. It is not the easiest cherry to grow but growers who have figured it out are enjoying great results and consumers who have tasted it always come back for more. 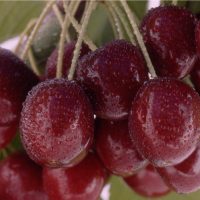 Perhaps the most well-known variety from Summerland, Sweetheart set the bar at a new level for late season cherries when it arrived on the scene in the 1990s. So-named because of its distinctive heart-shape, this variety is firm and crunchy with a mid-red skin color, and it continues to satisfy millions of consumers around the world every year. 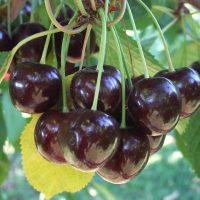 Ripening 7 to 10 days later than Sweetheart, Sovereign is larger in size with a similar mid-red skin and very firm flesh. Only introduced to the market a few years ago but already gaining in popularity among growers and consumers alike. 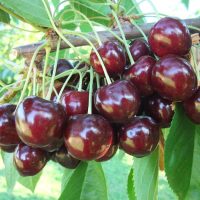 Another fantastic late-season cherry, with super-sweet taste and great size, from the Summerland stable. With a picking date similar to that of Sovereign, in the past few years Staccato has established itself as a firm favorite and we continue to see the tonnage increasing across our region as young orchards reach full maturity. 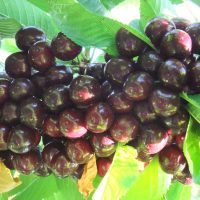 Fully 10 days later than Sweetheart, this variety has become the new ‘gold standard’ for very late season cherries. Dark red skin, and perhaps the firmest cherry on the market, it’s hard to imagine there will ever be a better way to end the cherry season. But watch out Sentennial, we’ve already seen some contenders at breeding stations and in test orchards around the world, including right here in BC where the team at Summerland just keep coming up with new gems.

There’s passion behind every cherry. Our growers live where they work and take a hands-on approach from seedling to harvest; the quality of the cherries they produce is a matter of pride.